After the missed bites from the previous night I couldn't wait to get back out again, especially as I was starting to have doubts over the new rigs efficiency, but after a bit of thinking-time I had a new idea that I was eager to try out.

Arrived with the wind a lot stronger than expected and the weed if anything worse than last night but soon had the mackerel out in the margins. At around 9.00 (high tide 10pm) I had a cracking take but again failed to connect. This happened over the next 2 hours and I must have missed a total of 4 bites until I finally landed a bass. Not a great fight and it was soon landed and measured at just over 20" but it was very thin so I don't expect it went much over 3lb. 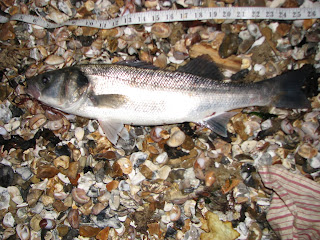 The hook-up was interesting and it showed that the smaller bass are unable to take the whole bait and run which is why I've missed so many over the last 2 nights. This points to potentially being a big fish only method which is ok but I still enjoy battling with bass around the 3lb mark, especially as it doesn't happen very often. Plus how big does the bass have to be for this rig to work 4lb+, 5lb+ ?

So its back to the drawing board or just keep using it hoping that it does work when the big girls make a reappearance.