A couple of trips

Yesterday I fished for 3 hours in very unlikely bass conditions -  calm, hot and the middle of the day. However this combination has produced before and Richard was fishing a mark much further along so it was an ideal opportunity to compare how they both fished in the same conditions.

As I wasn't expecting much action I set up two rods, and sat back to enjoy the wonderful October weather, after about an hour I had a fast start-and-stop run on the right hand rod. After a few minutes with no further action I reeled in to find a missing bait, assuming it was just a schoolie I rebaited and sat back once again to enjoy the weather, good to have some unexpected action though.

Another hour past and this time the left hand rod went and after a really good battle landed a bass that may have made 4lb - well I wasn't expecting that. 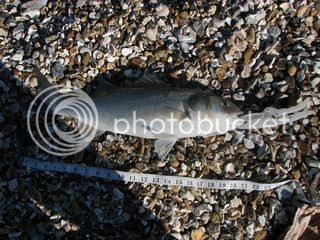 Later during the session I noticed bass playing along the waters edge, and some of them were clearly of a good size. Always difficult to estimate but the largest must have been double the size of my earlier fish. They didn't seem that keen on feeding and appeared to be enjoying the weather just like me along that particular spot. However after another hour my right hand rod went into melt-down until I set the hook on a small bass of around 2lb, I think all its energy was used up on the take as it came in with hardly a struggle.

When I got home we compared results and Richard hadn't had a touch which wasn't what either of us had expected. Boyed up by yesterdays results I thought I would try again for another couple of hours. Conditions were very similar but the easterly had picked up a bit and again I soon had two rods out. Knowing the bass were there in numbers yesterday I decided to have a clear out of my freezer and really bait-up to see if I could get there heads down.

Well they were there but not as many as yesterday and I didn't see any larger than about 4lb, and I didn't have a touch. Purely by chance I was discarding an old hook bait just as a bass was passing by, it watched the mackerel strip pass by on the tide like an old brown trout that had seen every fly in the book and then carried on its way. I can only assume in the space of 24 hours they had feed well and weren't hungry or they were on the look out for a particular food item (crab maybe?) who knows but that's what keeps us coming back.
Labels: bass crab follow a fool mackerel