The alarm went off and I so nearly changed my mind. I just couldn't sleep last night and must have dropped off about half an hour before the alarm went and for a while it was really was 50/50. Unusually I had to grab the various bits and pieces required as I hadn't got them ready in the car the night before but I was soon off in the dark towards my chosen spot.

Once again it was a one rod set-up and a large piece of mackerel and I was soon fishing the incoming tide. The last time I was here with Richard, it was very warm and without a hint of action but this morning had a bit more promise as the spring tides are now building towards Sunday and Monday.

At 8am exactly a heavy bang on the rod woke me from my daydream stupor, in fact it had me on the edge of my chair as the bang felt very substantial. 2 to 3 minutes must have passed and I was starting to think that maybe my bait had been removed when I could feel the line start to move out. I followed with my rod until the bass took matters into its own hands and ripped off.

What a fight, quite often large bass will make a couple of heavy runs and then allow you to bring it ashore - not this one as it gave me my best fight ever. Even when using the waves to bring it ashore it kept going and by this time I was becoming a bit of a nervous wreck as I could see it was another really good fish. Eventually landed I stood for a moment in awe as she was a magnificent specimen that looked like she may make the magic 10lb weight.

My hands were shaking as I measured from the fork of the tail to the snout, I needed 29" but she came in at 28". Just for a split moment I was disappointed before taking the obligatory picture and returning her to the sea. What a cracking fish and one that will stay in my memory for an awfully long time. 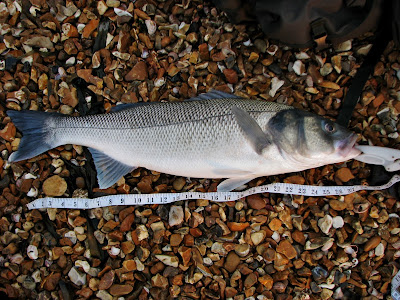