Its a funny old game this fishing lark. I nearly didn't go, I lost a good fish but landed one on my last bit of bait and went home with a huge grin on my face.

I went to the freezer and pulled out the last of my mackerel to discover its the pack I've kept back for groundbait as its been re-frozen so many times its turned yellow. Now I was in a bit of a dilemma, the tide wasn't great the wind was easterly and I was only going on a hunch but something made me go. I do remember saying to myself 'you can't catch them at home'

One rod held was the set-up today and I was fishing one hour after low towards high. Sea was a great colour in fact almost like the background I'm using on the blog but the wind was blustery which could make the fishing a bit interesting. After about an hour and having fished through a previous good bite time I started to worry about the bait, not only was it yellow but it had a very strange smell. To be honest it was only because this spot has two distinctive bite-times I stayed on.

Sure enough after another hour just as the waves were picking up and crashing down on the line I had a knock that was out of sync with the waves, quickly the line was taken from the reel and on engaging, the rod came down heavy as a powerful fish made off to my right. The bass here always run from left to right which is unfortunate as there is a line fraying snag that has lost me some good fish this year. I thought I had managed to stop most of the initial take but I was wrong as I could feel the snag rub against the line and after perhaps 2 minutes the inevitable happen.

I was gutted as it did feel once again I had lost a good bass. I carried on cursing away to myself and thinking I'd missed my only chance when after about 1/2 an hour I started to receive a steady stream of snatched bites. I use quite large baits so its not uncommon for bass up to 3lbish to struggle but over the next 20 mins it really did try. It went quiet for a while but then I had a different type of run that took my rod down parallel to the sea before I set the hook.

This bass really wanted its freedom but luckily for me instead of heading immediately to my right it went out and right giving me the chance to turn it. For a while it was stalemate as we both refused to give in but slowly with deep dives and twisting and turning it came towards the shoreline. At one point the waves broke to reveal a huge shaking head making me even more nervous than I already was but with the help of some big waves she eventually was beached. 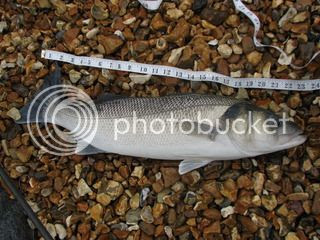 She was in fabulous condition but if I'm honest I was slightly disappointed with her size (the picture really doesn't do the head justice) but nevertheless she came it at just over 23" which would make her around 5lb+ and after my earlier disappointment I went home with a huge grin and singing my heart out. I just love this fishing malarkey.
Labels: bass Bass fishing blog follow a fool mackerel