A quick trip walking the dog

After watching seagull activity in the solent for a few days I opted for a bit of mackerel fishing Saturday morning. To be honest I wasn't holding out much hope as I drove along parallel to the shore looking for signs, as once again this has been a dreadful year for mackerel and after a while I started to think I may have missed my chance.

I had almost given up hope when I located some working seagulls, and even though they were working way beyond my casting range, I was just glad I found them! However it soon became obvious that the gulls were working on fry being chased by young bass as I could see them almost launching themselves out of the water in their eagerness.

Now for too many years than I care to remember I have dabbled with fishing with lures for bass, and despite many hours trying, many hours of reading about the techniques involved, it has all come to absolutely nothing - not even a follow. But it still didn't stop me trying out various lures in a hope of a schoolie and to cut a long story short I ended up with a follow from 2 bass and an aborted take.

I couldn't believe it, and was itching to get out again. However the weather had really turned for the worse so I wasn't surprised that nothing happened or was happening for the first hour, but remembering all the action started an hour before high I stayed on. Unbelievably fry and gulls appeared right on time and after a bit of experimenting I eventually hooked into a small bass using a light, coloured dexter-type lure. Happy days! But as the tide increased so did the weed which affected the lures action, so almost out of desperation I tried a suface lure. The wind had now really picked up but with small bass chasing fry almost at my feet I had to give it a go. 5 minutes later with fry still jumping around the lure it was smashed by an angry bass that punched way above it weight.

The bass of around 1 1/2lb was quickly released and I was back out again with new found confidence from suddenly realising I was in the right place, at the right time with the right method. Roughly 15 minutes later as I was trying my best to work the lure in between the waves, I watched open mouthed as a bass tried 3 times to take the lure. I was expecting it to be small so got a shock when we eventually made acquaintance and it tore off taking line briefly from the reel.

The waves helped the fight but it was soon beached, unhooked and released. What a morning, and I couldn't have been happier driving home, I can now see why this is so addictive and can't wait to get back out again. Here is a picture of the lure that did the damage courtesy of Henry Gilbey from his bass blog. 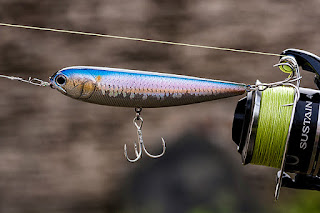