My attention wasn't really on the job in hand, a new lure and a new venue meant I really wasn't expecting much, plus there was an amazing electrical storm in the distance that kept insisting I should be watching it. The water was as flat as an unused swimming pool and despite it being 11.30pm it was still sticky hot.

In the silence I only just noticed and heard a small missed swirl behind the Dolive, that was encouraging! I was now back in full concentration mode as I continued to seek out the area. Roughly 15mins later, slightly further down the shoreline the lure was nipped, but 2 reel handle turns later the rod lunged over. I was fully expecting it to be a small schoolie but the bend in the rod continued and line started to peel from the clutch, when the rod sprang back now lifeless. Bugger.

I was surprised and encouraged at the same time as this was turning out to be an excellent first session. Working along the shore line I continued to work the Dolive still not really confident that I'm using the correct retrieval speed, when the lure became heavier as if was reeling through weed - but this wasn't weed. The rod was pulled viciously to my right and in the shallow water the bass put up an amazing fight running hard in all directions, leaving arrow headed wakes every time it ran from the tight clutch. 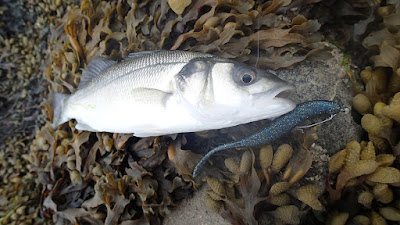 Although I was sure it wasn't much bigger than a schoolie it kept trying to convince me it otherwise, eventually after 2 to 3 minutes it was starting to tire from the long runs, but now every time I tried to beach it it was thrashing the water to a foam. Once beached I could see it would only make 2 1/2lb at best, goodness knows what a decent one would do in this shallow venue! Lightly hooked, it was easy to remove whilst it was laying on the weed motionless (I'm not surprised) and with a quick 180 turn it went back.

That was the hardest fighting 2 1/2lb bass I've ever caught and I can't wait to get back out again.