On our local forum we've had a 'Bass Bash' comp spread over the last week with the winner decided by the biggest fish. A great idea, with the thought that maybe we can find where they are and perhaps the best method for this time of year.

Well it was tough, in fact very tough. Here are my forum updates from the weeks efforts

Bass Bash 1 & 2 sort of...
Looked at the tides for tonight and thought bugger that so sneaked out for a few hours with the lure rod. First bash was Kicker, I reasoned with all this weed around and few reports (if any) of bass being caught, there just might be the odd loner working the shoreline over high. Arrived to find the wind off my back and the sea relatively calm.

First lure was the Dolive in green (melon I think its called) and I fished from the point down to the fence which separates the start of the wall. Trying my best to ensure I was fishing with the tide rather than against it, I worked from groyne to groyne. Not a touch or sign of anything around. Working my way back I changed over to my favourite surface lure which is a Sammy. Again worked between the groynes and not a nibble. Shame as the idea seemed plausible.

Second venue was a spot I've been looking at for a while. Really wanted to try it early or late in the day, but as I still had my tail between my legs I thought I would give it ago. The spot is behind the boating lake and once again I used the Dolive and slowly worked up to the bridge. Shows promise as I disturbed some mullet but nothing showed interest in my lure.

Well I've started now which is good and will be trying again later this week at times that will be more suitable.

Bass Bash 3
Planned to go this morning, set alarm for 4am got up and sorted everything out – then woke up in bed, its 8am and I had dreamt it! Not a great start, so I sulked for a bit before deciding I was going to go anyway.

Got into the car to head towards kicker but turned off to look at another spot I keep meaning to try behind Gosport Park. Had a look and despite the rapidly receding tide gave it a go. Not a touch or sign other than some small mullet, but hardly surprising really. May get out PM or tomorrow morning.

Bass Bash 4
Just got on from trying out another new spot, if nothing else this Bash has made me look at new venues. Lovely night although the wind never really dropped as I hoped.

Still continuing with the lures and despite all my best efforts could only managed one aborted follow, which I'm pretty certain was a mullet.

Bass Bash 5
Managed to get up this morning but didn't appreciate the small tide, which meant I was early by about an hour. Lovely morning though and it was a pleasure watching the tide slowly rise along with the sun. There were a lot of mullet around, in fact more than I have seen for many a year but I kept at it until at 6am, just as I was about to lift my lure from the water there was a splash. I assumed I had disturbed another mullet when my rod was viscously dragged down.

Great little fight close-in for a moment I thought I had maybe hooked a mullet, but was soon admiring a bass of around 2 - 2 1/2lb. I thought 'here we go', but it was another hour before the action started again. I missed a couple of enquiries and follows until one finally nailed it, again a cracking fight in shallow water but it wasn't long before I was admiring a smaller bass of about 1 1/2lb. 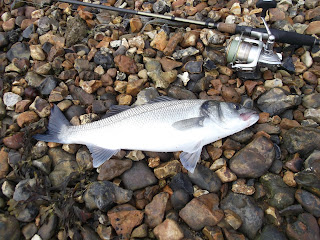 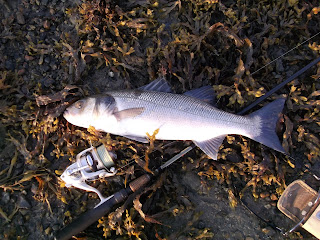