My recent results have been poor. In fact rubbish would be a better description. Not helped by fishing neap tides in the harbours when all the evidence points to big tides are required to bring the bass in. Mullet on the other hand have been around in numbers that I haven't seen for many a year - just wish someone could find an SP that they would take!

Two mornings ago driving along the sea front on the way to work I couldn't help notice the gulls working the shoreline. You have mackerel gull action and then you have bass gull action, and this was definitely the later as they were sat in the water waiting for the bait fish to be driven to the surface by the bass. This is only the second year I have seen this occur along our beach in over 40 years of fishing so it does bode well for the future as most of these bass are juveniles.

The plan was to work a late start the following day and hope that they would hang around for the next 24 hours, so yesterday I was up and out and arrived at my venue with hope and maybe a hint of anticipation. I was early for the tide and was surprised to see another angler already there and packing up, when I went over for the customary greeting I noticed a tray full of clams (I think) lovingly laid out in neat rows. It looked odd as the rest of the gentleman and his gear was the exact opposite, initially he accepted my greeting with an attitude brought about from years of suspicion but he softened quickly and later on leaving, he wished me the best of luck.

For the next 2 hours I worked the water in hope that the shoals would appear but both myself and the seagulls, who were gathering in excitable anticipation, were left waiting. I decided that I would work my way back to the car consigning myself to another blank trip when I noticed in the distance to my left, perhaps a hundred yards, a lovely natural crease in the water formed by the tide and the sea bed. Despite fishing this area for the last 2 years or so I had never noticed it, but it looked really interesting as the crease started about 10 yards from the shore and worked out at a slight angle towards the sea.

When I arrived I could see flat spots amongst the waves created by the odd bass turning just below the surface in search of their prey. Quickly I put on a surface lure and out it went. There is something special about a bass repeatedly attacking a lure from behind and it wasn't long before I had hooked my first of many bass.

Later as I was returning a bass I noticed to my right a kayak fisherman approach, a bit disappointed but I suppose its everyone's sea. However he kept approaching until he was right in front of me and then asked how I was doing! Slightly surprised I replied 'yes ok thanks, a few small ones' as he turned he said 'I caught 11 mackerel yesterday' and then paddled off! Throughout the conversation bass were topping all around him but I don't think first or last he noticed any of them!

Below is the best bass of the session at 19", may have made 3lb 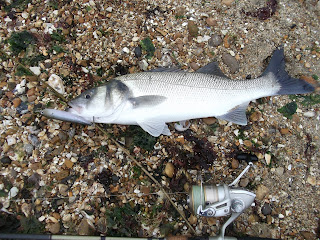