Not sure if I have missed any catch's on here as I've had a few fruitless trips recently. One spot I have fished does show promise though and its one for summer next year for sure.

Anyway, this is the time of year where you hope as a bass angler the bigger girls make an appearance. Most years they do and with luck if you are on the right tide, you could strike lucky. Last year I wasn't, despite trying my best, so I'm hoping to make amends.

Started off Friday morning with bait (large mackerel) fished close in as usual as a warm-up for next weeks great set of tides. Woke up early to a mixture of fog and mist and made my way to my spot, with rod already set-up it wasn't long before I was fishing. Fished through a couple of bite times (they could have changed since last year) but started to get some knocks 1 hour before high from small schoolies.

After about 15mins without any warning I had an amazing run, which I promptly missed. Recently I've changed my old Okuma reels due to old age and wear and got a good deal on a pair of Shimano's. As much as I like the feel and tightness, I just wish the freerunning function wasn't so damned quiet, even with me holding the rod I had to look down at the reel to see if line was still being taken.

Over the course of the next 15mins or so I believe the same bass kept coming back until 3rd time lucky, I was in. Straight away it ploughed head first into the snag I was fishing against, my side strain made it kite along its length of perhaps 3 metres or so. Deciding this wasn't working, it stopped and thrashed the surface before diving deep but I was able to turn it left into open water. Again it thrashed away but a screwed down clutch meant the fight was now soon over.

I'm often a bit slow when it comes to changing my gear and this was another time when it has taken an age for me to step my line up to 15lb, and what a difference it makes when fishing close to snags - should have done it ages ago!

Nicely hooked in the scissors, unhooked and returned. Roughly 4lb and a good start to my autumn campaign 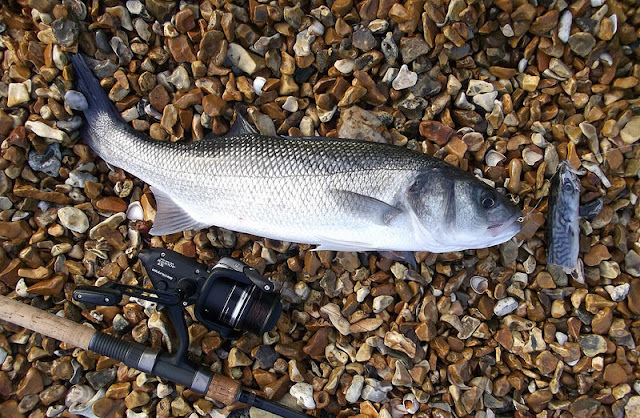