Went out last night to fish the tide up, high was just after midnight. Same venue as Rob's 8lb and everything looked and felt great. However nearly 2 hours later I was starting to wonder if it was going to be one of those nights. Thank fully at 9.30 I could feel an enquiry through the rod and line and minutes later the bass made off with the mackerel head.

Everything pointed to a small bass, and I thought I was right when it quickly came to the surface creating a flurry of white in the surrounding darkness, but then it surprised me by taking line off a tight clutch running parallel to the beach back and forth. It was turning out to be a great fight, with me grinning ear to ear as the bass felt larger with every passing minute.

I just love using the 9ft Wychwood Extricator for my close in fishing, it really is a great rod for the money and has stood-up really well to a few years of sea fishing abuse without any care from me either. The combination of this light responsive rod and a powerful bass on the other end is intoxicating - as they say the tug is the drug!

Bringing the bass ashore with help from the building waves I chuckled at its size, it was another good-un and as plump and tight as a newly pumped football. In fact I had to measure it 3 times as it looked so much bigger than the 24" (over the body measure). The waves didn't help with its return but eventually it righted itself and headed out to sea.

I stayed on to just gone 1am, but nothing else happened. Really strange that day time tides are more productive than night at the moment. 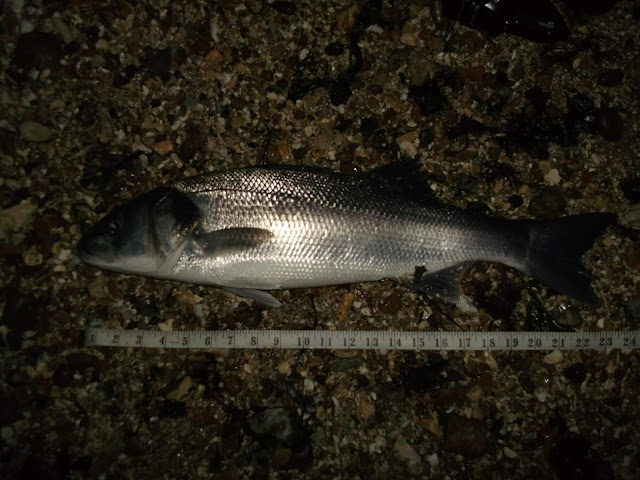