Quick update from my last 3 trips

07.10.18 - went out with the lure rod and fished though what should have been a great night tide and set of conditions. Not a touch, and I came away a bit disappointed. As an aside it was so quiet down there it almost felt errie. Most strange

08.10.18 - fished a day tide in again what I thought were great conditions, and apart from a small schoolie trying its best to eat my bait first cast. Not a touch for over 4 hours. Didn't help that a seal was working the shore line the exact distance I was fishing, if he's been doing that for the last 10 months or so, how many bass has he had?

09.10.18 - My brother in-law Rob wanted to join me so I tried another venue. Doesn't have any gear at the moment, but not a problem, 'you can use one of my rods'. Missed three runs from the off, one in particular felt a like proper one, and then Robs rod ripped off. Watched him literally being dragged along the beach, 'are you sure the clutch isn't too tight,' says Rob. 'Stop being a pansy and get it in' was my reply - until I caught a sight of it!

This bass gave a great account staying deep and really running hard, Rob did a great job and we were both jumping around like kids when I pulled it up the beach for unhooking. Measured at 27" which makes it around 8 to 8 1/2lb. It was great to see it swim off as strong as it fought.

Now people say they get just as much enjoyment seeing others catch, well maybe they do but from my point of view couldn't be happier for the guy when they're smaller but when they are that size I do have mixed emotions! 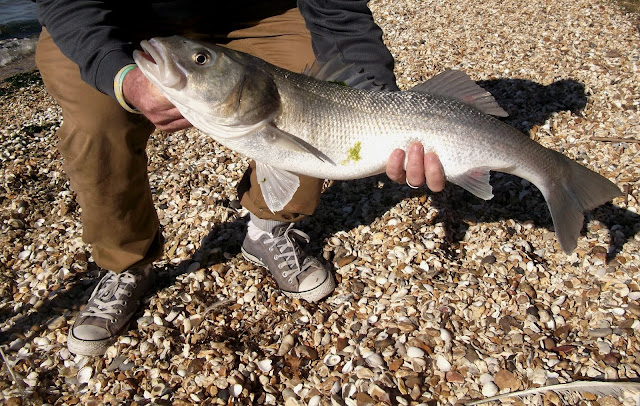