Haven't been out for a while, and when the alarm went off at silly o'clock this morning, it so nearly didn't happen today either. However I made my way to my harbour mark knowing that on such a small tide I shouldn't expect much.

Walking parallel above the shore line before I needed to make my way down and then retrace my steps, I heard and then watched a bass swirl very close in the shallow water. This was the first showing I had seen this year, so suitably encouraged I walked at double-time to get down to the shore line.

Once onto the shore I started to make my way back to where I had seen the earlier movement when I disturbed another bass close in. I kept still for a short while and then with a gentle underarm swing sent out a Dolive. Immediately the bass came to investigate but despite several casts I couldn't entice the bass to strike. Never mind, this was a great start and showed that the bass have definitely arrived.

Over the course of the next hour or so I received 3 similar enquires, and despite changing colours none of them resulted in any hook ups. Bloody exciting stuff though, watching them move onto the lure and then turn away at the last moment.

I decided to change to a Speed Worm in green when I noticed another disturbance right at the maximum distance I can achieve with this light SP. So straight out it went, and straight into a snag - or so I thought. The rod was bent with no movement, but after what could only have been a couple of seconds at most, I could feel a slight tremble through the blank. Still not sure what was happening I reeled down some more, when the bass whipped off to my left. Fish on!

A spirited battle followed in the shallow water, beached, pictured and returned. Only small (maybe 1 1/2lbs) but it signalled the end of the feeding spell. Despite hanging around for another hour there were no more signs or action. Great session though on such a small tide, and if I can I'm pretty certain I will be out again tomorrow. 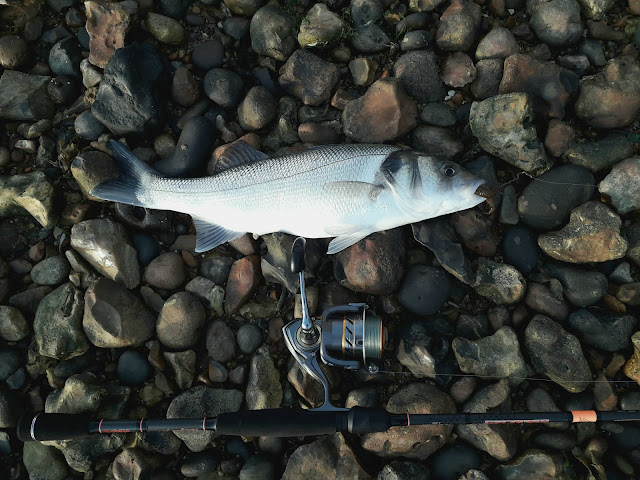