Fished another late one last night and I must be getting old - cause I'm knackered. The wind direction put paid to a revisit to my last blog, so it was back to the harbour where a sws wind is on your back. Felt good when I arrived, but after a couple of hours the lack of anything was surprising.

Whilst walking along the water line I stumbled over a rock and landed just a bit too heavy, on looking up I noticed a gentle ripple moving in the opposite direction, so they were there, but not in any numbers. All manner of SPs were tried, including the faithful speedworm, the not so Dolive's and a lure of my making, a 'Doworm', which as you may have guessed is a mix of the two.

It was now past midnight, and surprisingly I wasn't feeling tired, so I kept going. In the flat calm conditions you can normally see and hear the bass and mullet approaching, but it remained absolutely still, and with the moon out of action; unusually dark for this mark. Now I've read how great the Dolive in white is at night, but despite countless hours of using the damn things, I have never had so much as a touch or follow when using them. I've come to a conclusion that maybe they mirror sandeels at night (?), and as we don't get these along my neck of the woods, that's the reason for no success.

However it really was dark down there so I thought, why not, and gave one ago. Second cast parallel to the shoreline, I felt a nibble. Hoping it wasn't weed playing tricks, out went another cast and sure enough, bang the rod bent over! A great little scrap in the shallow water, with the sound of the white water echoing along the harbour. It was only small (just over a 1lb) but I didn't care one jot. 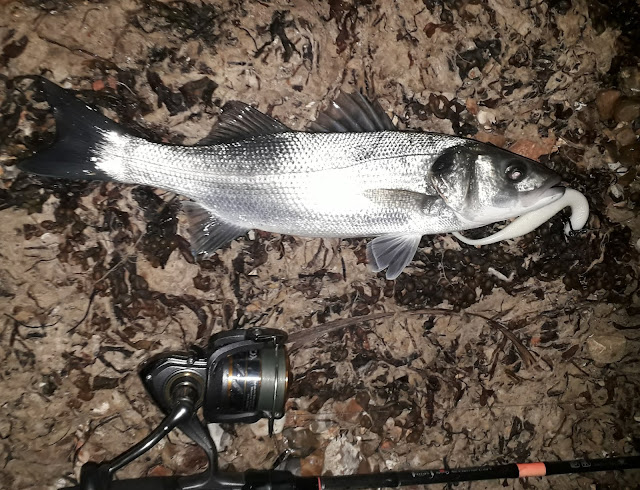 Despite another 40 mins or so, nothing else showed interest, and I was just in the throws of just one more cast, when I heard a small splash just out of casting range. Quickly I sent out my new favourite lure, but the cast was poor and landed right of where I expected. But maybe as the tide had turned the bass would be heading in that direction? About a third of the way in, just as I slowed my retrieve and dropped the rod tip, I felt a soft thump on the line which turned into a bang as I lifted to continue my retrieve.

This time the fight was deeper making me think for a split second I'd hooked a decent one, especially when it ran towards me, but it was soon landed, and maybe just a bit bigger then the first. No picture, quickly unhooked and returned. I think my recent run of blanks have made me appreciate success, however small, so much more. Which is no bad thing.