'A great wind is blowing'

The forecast was for the wind to drop around 5pm, then it changed to 6pm - bugger it, I'm going anyway. When I arrived the sea state was rough and the wind was probably the strongest I have ever tried to fish in. The looks I got from a few hardy dog walkers when getting my stuff from the car were comical. They must have thought I was mad, as when I tried to acknowledge them they looked away.

Walking along the shoreline I was amazed at the strength of the wind, it was quite literally blowing me up the beach, oh well, nothing ventured and all that. First cast was a mass of unfishable weed in seconds, dragging everything immediately back to shore. Walked along and tried again, same result. I continued this for about half an hour but the weed was ridiculous, not only were there huge rafts of visible weed floating on the surface, but there was masses of the stuff in the undertow that wasn't showing on the wave as you looked.

What was really pissing me off, was watching a mass of gulls working the crashing waves on what I assume were idotea being washed out from the floating rafts of weed. There had to be bass out there, and I couldn't get a bait out! Resigning myself to looking for another venue, I kept trying spots on the way back to my car, until unbelievably I found one that was clear. I couldn't believe it, so out went the squid with me holding the rod against the wind and the sea spray. The bait could only have been out for 4 minutes when I felt a knock and then a determined run - fish on! The fight was strong but short with the bass taking full advantage of the undertow. It measured nearly 27", making it around 7 1/2lb to 8lb and went back strongly.

I carried on for the next 2 hour, and received just one more big knock, that unfortunately failed to connect/develop, and then the weed started to build up so it was time for home. I was wet, wind blasted and my back was screaming but I couldn't care less. 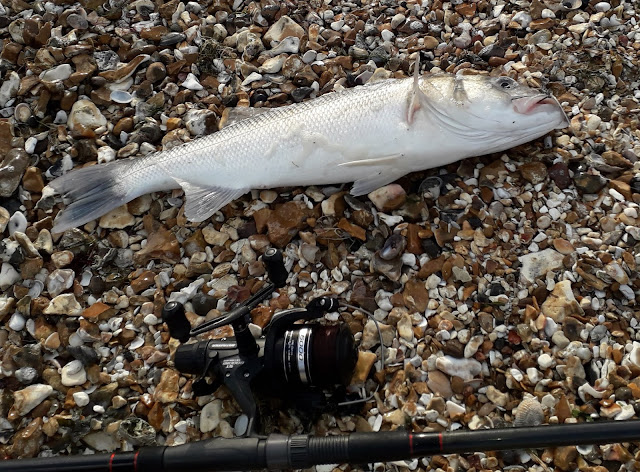