Well it looks like lockdown is set to continue for a while, so I've been reading through my old blogs I used to have on Wordpress, and with all this time on my hands decided to update my reminiscence series.


If you change your mind…


Thomas is in the car and he's not happy, his sister is out all day with Mum - so he’s stuck with me. When we pull up to the beach we are both surprised by the strength of the wind, oh well, if the forecast is right it’s meant to drop this afternoon.

The walk across the stones feels encouraging and it’s starting to feel good, I’m asked if it’s ok just to watch today, ‘of course,’ I reply, ‘but if you change your mind…’

Don’t think that is ever going to happen.

Setting up we notice the weed in the waves and hope this doesn’t cause a problem, and soon have a distance rod out at around 50 yards with the other rod placed close in as usual. The sky to our right has the appearance of an old school blackboard that’s been smudged rather than cleaned, but I don’t think we will be hit with rain today. The wind however shows no sign of abating with the waves growing bigger on the strengthening tide.

We start to cover a whole range of topics and I begin to wonder at what point did he start to know more than me about so much? Maybe feeling he was on a winning streak he started to explain that due to the digital revolution his is the first generation that ‘know’ more than their parents. Just then my distance rod lunges in its rest.

I am quickly out of my chair and into a bass which takes real advantage of fighting at range. Keeping deep it was able to take line on the most determined runs but gradually I was able to bring it closer to shore. A couple of times I thought I had it beat but it had other ideas powering off parallel to the shore until eventually with the help of the waves, I was able to beach it.

An elderly couple who had passed us earlier came up to us with a speed that belied their age and said, ‘Well done you! That’s a splendid fish are you going to eat it?’ They seemed very surprised to hear that I was going to return it, so much so I felt I had to say (in justification) could you kill such a magnificent creature? 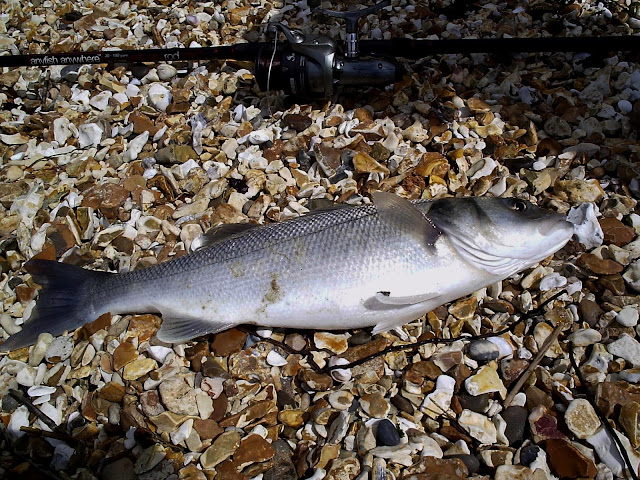 There shock was then complete and audible when I brought out my camera, ‘he’s going to take it’s picture!’ When returning the bass I could just imagine their conversation on the way back. An hour or so later, as the waves were increasing in size with the tide and the strength of the wind we decided to leave.

The long walk back was full of talk so different from when he was a child. Then, it was what he and his sister had found and the adventures they had, now it was all about how it was going to be in the future.

It is almost like he has turned into a young man overnight and one I am very proud of… even if he doesn’t like fishing.