Wish I had stayed on... but it was great to catch up

For those who know me this won't come as much of a surprise, but I don't have may true friends - however not being able to see them has been a real wrench. So after the last few nights of hot and humid weather I thought it would be a great to combine sitting on the beach with a rod and have a social distance chat with my mate Graham at the same time.
Well the fishing soon went out the window for the first hour or so as the weed over low was almost unfishable, so I propped up the rod against the groyne and hoped the weed would move on as the tide progressed and continued to catch up with my buddy.
Later on I tried again by keeping as much line out of the water as possible to avoid the weed and it didn't take long before the squid bait attracted some interest. I turned to Graham, who was stood beside me, and was just about to say I've got a bite when the reel went into meltdown. I followed the bite with the rod but as soon as I went to disengaged the freespool it stopped!
Cursing my luck I turned to Graham to explain, when the bass took matters into its own hand and ripped off towards the IOW, creating a flurry of white water on its way. After this initial burst of energy it was then a case of pumping a bass of around 4lb to shore, photo and a quick release. 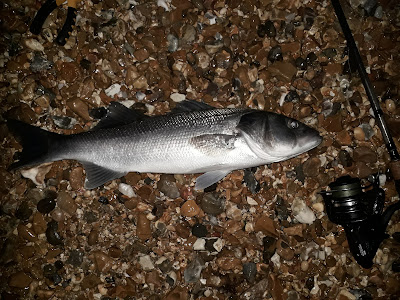 After a few social distancing man-hugs Graham left soon after to leave me fishing the tide up, conditions were amazing (not ideal for bass) but after another 1.5hrs I I had a smaller bass of around 2lb. I wanted to stay on but tiredness and work in the morning got the better of me, which was a pity as I'm sure there were a few more to be had on this tide.