A couple of updates. First one is from the 31st May (doesn't time fly.) I wanted to get out all week and have another try for those Thornbacks, but with one thing or another I could only managed a day tide, but thought what the heck. Fished just the one rod at distance with a combination of macky and squid on a pulley rig, not a touch. However it was a great trip because one, I wasn't fishing like a fool like last time, and two it was just lovely to be out. 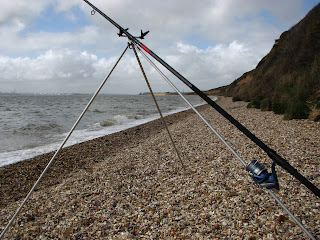 My next trip was last night and puts our own trials and tribulations into perspective. I decided to fish out of the wind in a hope of early bass, little did I know that around the corner three forum members had the tragic misfortune to reel in a dead body from the sea. Apparently she was a mother who recently lost her young son to a lorry accident and it is believed she took her own life.

Sometimes words are just not enough, but our hearts and thoughts go to her family.