'You should be catching them by now...'

For the last two days the weather has been gorgeous, and as usual thoughts while looking out the office window, turned to an early bass session. Recent reports of smooth hounds being caught locally almost made me change my mind, but driving home and seeing seagull and whitebait activity in the Solent made my mind up.

Rod and stuff seemed pretty much together from last year (which is always a bonus) and after tea with the family I was off. June last year was the earliest I'd ever caught a decent bass, so to be honest I wasn't expecting much. I started off with squid and was soon sat back soaking in the atmosphere, it really was a lovely evening.

I received a couple of texts from my sister who is currently in Wales while walking Britain, and she told me that for the whole day they were surrounded in 'peasouper' fog, and apparently I should be catching them by now! Around 10pm I thought about calling it a night when the usual just one more cast kicked in, so I was shocked when at 10.40 (I know there is always just one more, one more) I had a savage take that I missed.

Reeling in I could see the bait was still intact, but marks on the mackerel showed why I had missed the take so I decided to cut it in half. Within seconds of the recast I was in as a bass gave me a great run around fighting deep and taking line against a tight clutch. Once beached I discovered I'd lost my tape measure (where do they go!) so quickly weighed her at just 4lb and then she was quickly returned. After sitting back for a bit I ground baited the area and once again lobbed out a mackerel bait, another 10 minutes or so passed and I missed another take. This one never returned and although it didn't have the usual feel of bigger bass there was something about it that made me wonder. Another recast and after a while was sitting back and enjoying the conditions and thinking about texting my sister to say she was right when bang, the rod was away again. I think this bass had picked up all the freebies as there was no messing around this time but the fight was very different. Unusually the initial run was to the left as they always run right (well they used to!) and fought the whole time on the surface thrashing the water to a white foam, despite run after run I always felt in control but was relieved when she was eventually beached. 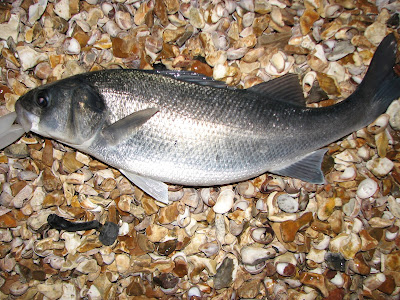 Although you can't tell in the pictures, this one had a different shape and for a split moment in the dark without my glasses I had to give it a double take as thought I had caught a Pollack due to its pointy nose. Again quickly weighed (4 1/2lb) and returned.

I was soon driving home with a silly grin on my face.